Please send a subscription email to iprfocus@ipr.gov.cn to obtain the weekly IPR newsletter. Click more to view the previous newsletters. 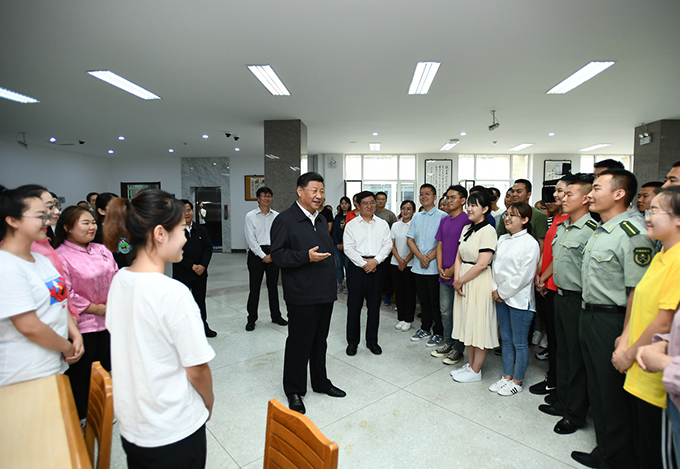 President Xi Jinping talks with students at the library of Inner Mongolia University in Hohhot, the capital of the Inner Mongolia autonomous region, during his tour of the region, which concluded on Tuesday. [Photo/Xinhua]

President Xi Jinping emphasized the importance of preserving the cultural heritage of ethnic groups during a two-day inspection tour of the Inner Mongolia autonomous region.

During a visit to Chifeng Museum, Xi, also general secretary of the Communist Party of China Central Committee, watched a live performance of the heroic epic King Gesar.

The King Gesar epic tradition was added to the UNESCO Intangible Cultural Heritage List in 2009.

"The reason I came to see you and listen to your singing and playing is to show that the CPC Central Committee is supportive of protection of intangible cultural heritage," Xi said.

Continuous exchanges and integration among 56 ethnic groups formed today's Chinese nation with diverse cultures, Xi said. China has a time-honored civilization that has developed without interruption, which is unique among the world's civilizations, he said.

Xi also visited farmer Zhang Guoli's home in the village of Maanshan in Chifeng — the region's most populous city, with 4.64 million residents from more than 30 ethnic groups.

With four generations living together, Zhang's family members are of Mongolian, Manchu and Han ethnicities. Seeing them happy together, Xi praised Zhang's family as a home of national unity.

Inner Mongolia has always been a model of national autonomy and unity, Xi said, and he called for efforts from all ethnic groups to promote China's development.

When Xi visited a community in Chifeng's Songshan district, residents sang and danced under the guidance of Ulan Muqir artists. Ulan Muqir, which means "red bud" in Mongolian, is a troupe that performs for herdsmen in the prairies of Inner Mongolia.

Xi called for efforts to promote, support and advocate these types of grassroots cultural activities as they preserve traditional culture, are loved by the public and will never grow outdated.

Xi visited a forest in Maanshan, spoke with forest rangers and learned about the area's ecology. The rangers told Xi that more animals, including roe deer and boar, are being spotted since the environment has improved. People have benefited from selling forestry products to the growing number of tourists.

It is of strategic significance to build an ecological buffer zone for North China and Beijing, Xi said, adding that the work should be carried on from generation to generation.

Xi was briefed by the regional Party committee and the regional government on their work and the ongoing education campaign with the theme "Staying True to our Founding Mission".

He said that Inner Mongolia, with rich natural and ecological resources and diverse ethnic cultures, has huge development potential and a significant strategic position.

Faced with rising instability and uncertainty in the international situation, the president called for arduous efforts to fight the "three critical battles" against major risks, poverty and pollution and help maintain sustainable economic development.

﻿
The site does not verify the authenticity of the articles reproduced or translated from the Internet. All views expressed in such articles do not represent the opinions of the site. Please contact us for correction or deletion if you find any misstated source or copyrighted material. Thanks!